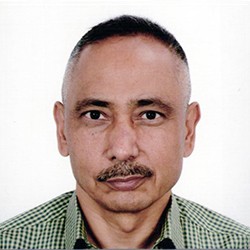 Surendra Singh Rawal, a PhD in political science from Tribhuvan University, is an experienced national security and strategic affairs professional with thirty-two years of service in the Nepali Army. He is a graduate of Naval Postgraduate School (Monterey, CA, USA) as well as the National War College (Washington DC, USA), where he received Master’s Degrees in Security Studies (Civil-Military Relations) and National Security Strategy. He also holds a Master of Public Administration from Tribhuvan University (Kathmandu, Nepal) and a Master of Science degree in Defense and Strategic Studies from Madras University (Madras, India). In addition, Dr. Rawal has completed various military courses and trainings from Nepal, India, China, the UK, and the USA.

As a Brigadier General, he served in the capacity of the Director of Plan and Policy at the Nepali Army headquarters. Previously, he was appointed as a Directing Staff of Nepali Army Command and Staff College (ACSC), where he taught and guided mid-level military, civilian, police, and armed police officers from Nepal and foreign countries. He also served as the Chief Logistics Coordinator, conducting logistics and relief operations during the 2015 Gorkha Earthquake in Nepal. During his more than three-decades-long tenure, he contributed to several task forces relating to national security, strategic affairs, and defense policies.