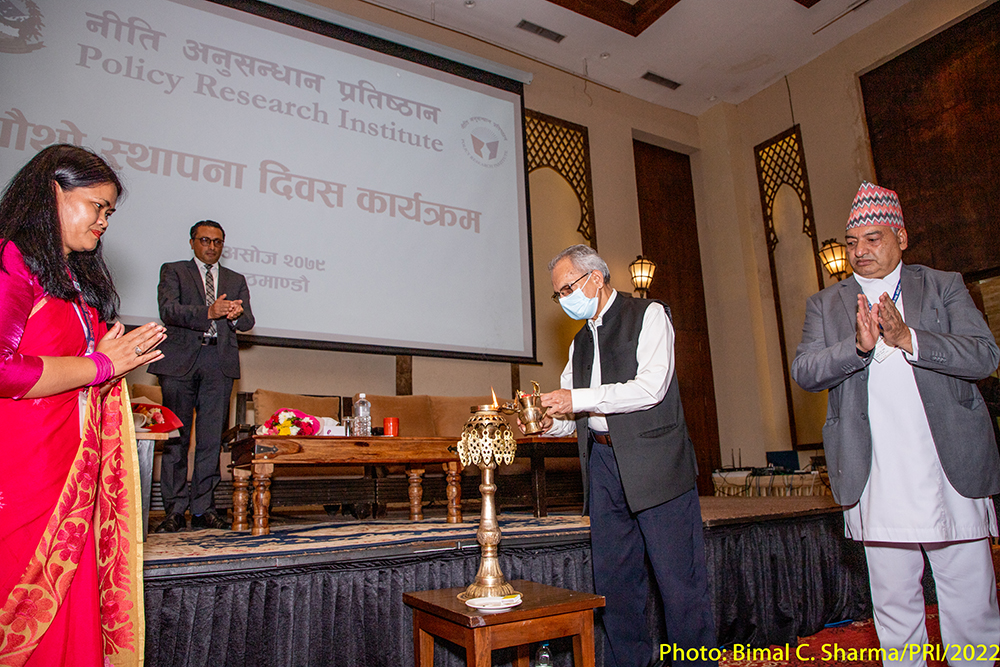 Policy Research Institute marked its fourth anniversary, on 25 September 2022, amid a grand function that was divided into two parts. The function was chaired by PRI’s Executive Chairperson Dr Bishnu Raj Upreti and graced by, among other dignitaries, a former Prime Minister, a sitting Minister, high-level Government officials, researchers, scholars and journalists.

The first – celebratory – part of the function included the presentation on PRI’s progress and achievements as well as challenges and difficulties encountered over the year; the release of five key publications that drew on the PRI research completed in 2021/2022; the presentation of ‘policy honour award’ to Nepal Administration Staff College and ‘policy honour felicitation’ to the Institute for Integrated Development Studies and Department of International Relations (Tribhuvan University) for the recognition of their contribution to public policy reform and innovation through research, publication and training/education; and, felicitation of Mr Krishna Prasad BK as PRI’s ‘employee of the year’ and Mr Dipendra Prasad Pant and Ms Rija Manandhar as ‘employees who have specially contributed to PRI.’

The second – substantive – part comprised a special lecture by Dr Swarnim Wagle, a renowned economist, who attended the function as a special guest; and, former Prime Minister Dr Baburam Bhattarai, the chief guest of the function. Delivering a lecture on the “Role of Think Tanks in the Development of Least Developed Countries,” the duo underlined the importance of think tanks in a nation’s overall development and warned of the costs a nation that despises think tanks would have to pay.

A message received from Prime Minister Sherbahadur Deuba congratulating PRI scholars, researchers and staff was also read out as part of the function. In the message, Prime Minister Deuba stated that PRI was established to help develop evidence-based policies on the basis of in-depth study and research, and committed to providing additional support that PRI would need to build and strengthen its capacity in order to carry out its functions more effectively. State Minister Umesh Shrestha, present at the function as a special guest, also assured the audience that he would do all he could to ensure that PRI gets sufficient resources to undertake its main function.

For more information about the event, please read this Note.