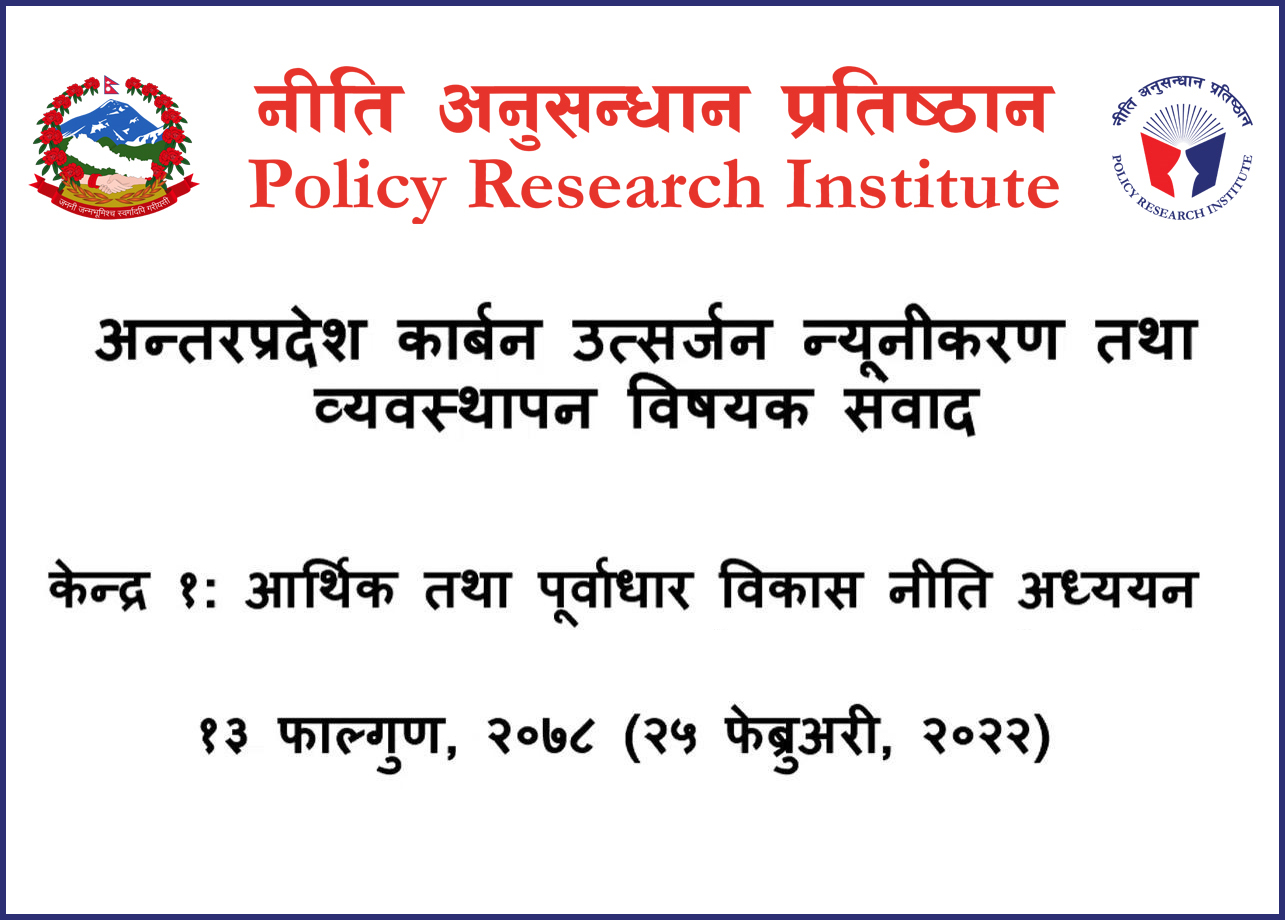 The main objectives of the policy dialogue were to review existing carbon emission policies, national and international, as well as those governing nationally determined contributions, the Paris agreement and COP26, and use the dialogue outcomes to contribute to the policy and programmes of the fiscal year 2079/80 BS, especially as regards the policy on inter-state carbon emission.

The event was organized around the following questions:

Rajendra Senchurey, Analyst at PRI, welcomed the participants and Dr. Mukunda Kattel, Senior Research Fellow, gave a brief presentation on PRI, its scope of work and priorities.  Dr Rajendra Khanal, Research Fellow and the lead investigator for Carbon Emission Policy Formulation at the Center for Economic and Infrastructure Development Policy at PRI, presented a brief outline of Nepal’s national policies on climate change and emission reduction programs (ERP). He then invited participants to share their views and ideas around the three questions.

Participating in the discussion, Thaneshwar Bhandari fromTribhuwan University, underlined that to contribute to net-zero emissions, policies should be adopted – and practised – to promote climate-smart agriculture systematically. To achieve this, he added, powers that should be exercised and the duties that have to be fulfilled levels of government (federal, provincial and local) should be clarified and implemented. The use of briquettes and other climate-smart practices should be maximized in all villages and awareness should be raised against residue burning, which has become a serious problem these days as livestock rearing has decreased. Similarly, Mr Bhandari went on, the effectiveness of existing carbon emission policies should be reviewed, and, based on the outcomes, new scientific and implementable policies should be formulated. To this end, necessary cooperation and collaboration should be promoted among academic universities, governments and industries.

Dhruva Pant from Agriculture and Forestry University suggestedreviewing Local Adaptation Plans for Action (LAPA) and National Local Adaptation Plans for Action (NAPA), as the first step, and see what activities they have been doing, what they have achieved till date and how effective they have been overall. Only based on this, should any further step be taken. As the local level has its own priorities, Mr Pant said such national targets should be coherent with or linked to the local targets. Similarly, capacity needs of local levels should be identified and delivered in terms of human resources, finance and infrastructure as required to achieve these targets.

Binod Bhatta, from Alliance Nepal, remarked NDC national target needs to be distributed among seven provinces along with quantifiable indicators in order to reduce emissions from different sectors to achieve net-zero emissions. Detail study is essential in each province, he further underlined, to review what emission targets have been achieved and suggest what additional actions need to be taken towards emission reduction by each province. Prioritization is essential which is lacking in Nepal. If net zero-emission is the priority, the government should prioritise it as such as redirect the focus on it.

Bhava Prasad Tripathi, a soil science expert, said proper organic management is required at the local level to increase organic carbon content in the soil. The experimental climate-smart agriculture practices being promoted in small areas should be made largescale having them linked to income-generating activities. In Terai, he added, due to the migration of youths, farming has decreased, together with livestock rearing and the resultant decrease in the use of organic fertilizer. All this has contributed to the overall decrease in the store of carbon in the soil. In hilly areas, soil erosion has caused the release of carbon through soil loss. To compensate it, erosion control management is essential together with the promotion of agroforestry to enhance soil carbon sequestation. Unless sustainable agricultural practices are institutionalized, such as the integrated use of agrarian, chemical and organic fertilizer or a combination of inorganic and organic material, the land will turn into desert in years to come, he warned.

According to Ram Chandra Neupane, from Eco Nepal, deforestation remains a major problem in rural areas where people still depend upon forest resources for fuel. They are either unaware of improved cooking systems or have no access to the supply of such systems. The lack of land use management skills continues to be a cause for soil erosion. In some ways and cases, community forests are considered good. They have, however, displaced natural forests and depleted soil fertility, to reclaim which natural forests should be promoted. Similarly, to reduce people’s dependence on forests, a reliable electricity supply should be ensured.

Umesh Balal Magar,from Nepal Youth for Climate Action, said that the NDC targets are ambitious and to achieve them requires youths to get mobilized. Mr Magar also stressed promoting inclusive ERP. Prativa Paudel of Kathmandu University underlined that provinces should own faecal treatment plants. Existing wastewater management plants can be used for this purpose. As regards methodology, Ms. Paudel added, dependence upon IPCC default value may not be enough and result-based data should be generated through proper documentation of trustworthy and transparent evidence.

Sushil Dhakal from Community Development  and Advocacy Forum Nepal, Mahottari,  said the preservation of Chure, on which the ecosystem of Terai depends, should be made a top national priority to achieve carbon emission targets. According to him, Chure’s preservation requires innovation in the river system, promotion of green economy, such as river-bed farming as in the Ratu watershed, land reclamation and the promotion of smart forestry in the desertified areas.

Pravin Dhakal from the Province Policy and Planning Commission of Gandaki Province suggested setting targets based on the understanding of ground reality and consideration of cross-cutting components. For example, the development of roads should consider its impact on the environment; and, internal migration has to be managed to reduce the population pressure on Terai. He also suggested institutionalizing the practice of outcome-based policy reviews and formulation of implementable policies.

Dani Kant Jha, from the Madhesh Province Policy and Planning Commission, said the combination of the decrease in agricultural workforce, the lack of irrigation facilities and insufficient supply of fertilizer has affected agricultural practices, which has contributed to CO2 emissions. Agricultural residue burning and tyre burning during protests are also the sources of emission. Other causes of emissions are, he added, the exploitation of Chure and the resulting desertification in Terai. The solution to this, he underlined, is the development and implementation of effective policies in consultation with province and local levels.

The participants unanimously agreed on the following key strategies to strengthen emission reduction:

At the end of the event Dr Bishnu Raj Upreti, the Executive Chairperson, thanked all the participants for their active participation and useful suggestions and closed the dialogue with the assurance that the ideas suggested would be included in the recommendation to the GoN.